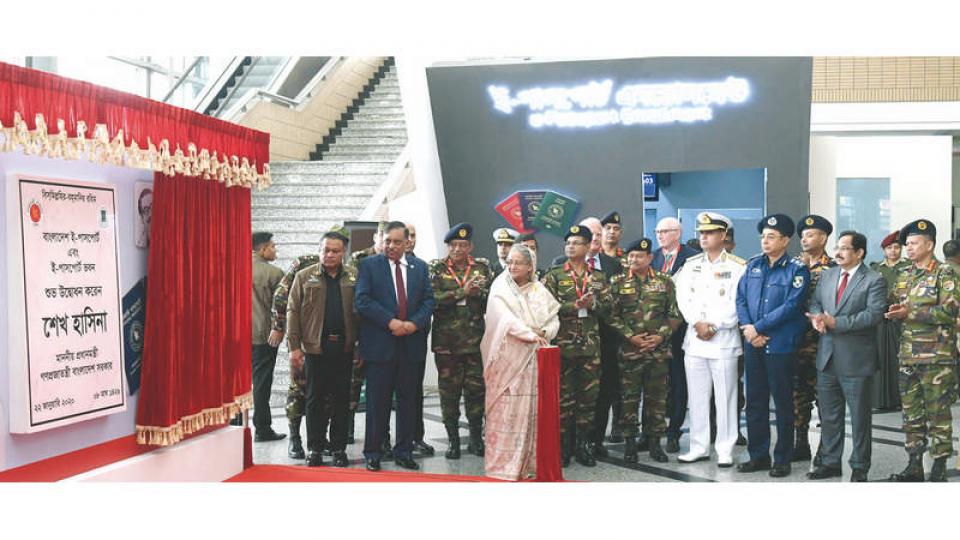 “We’re handing over the e-passport to the people of the country in ‘Mujib Barsho’, the special year, coinciding with the birth centenary celebration of Father of the Nation Bangabandhu Sheikh Mujibur Rahman. It (e-passport) is a gift for the nation in the Mujib Basho.”

Sheikh Hasina said due to the introduction of the e-passport, Bangladesh will advance another step forward and the people will no longer be deceived regarding the passport. In the e-passport, there will be an embedded microprocessor chip that will contain all information along with the photo, fingerprint and iris of the eye of the passport holder.

“E-gate is going to be incorporated with e-passport, and once e-passport and e-gate are introduced, the immigration and passport services will become easier, smooth and of international standard,” she said.118 countries have already introduced e-passports and Bangladesh is the 119th country among them and the first in South Asia.

The premier said the government has digitalised all the activities of the DIP to attain the immigration-related SDG. “We’ve also set up 69 passports offices in 64 districts, 33 immigration check-posts and passports and visa wings at 75 missions abroad aiming to reach the passport, visa and immigration services to the doorsteps of the people.”

The government launched the Machine Readable Passports (MRP) and Machine Readable Visa (MRV) in 2015. “The MRPs were so far issued to about 2.7 crore Bangladeshi citizens, while MRVs to 15 lac foreigners,” she said.

Brigadier General Saidur Rahman Khan, Project Director of E-passport Project gave an overview of different aspects of the project. Later, the home minister formally handed over the prime minister’s e-passport to her.

Sheikh Hasina later inaugurated electronic passport (e-passport) and automated border control management programme by unveiling a plaque. She also opened the e-passport complex and visited enrolment booth of the e-gate from the BICC.
The validity of e-passport will be five and ten years.

Asaduzzaman said after the inauguration, initially the Department of Immigration of Passports (DIP) will distribute e-passport from Agargaon, Jatrabari and Uttara passport offices. He hoped that the e-passport will be introduced all over the country by 2020 and every day 25,000 passport can be issued.
According to the project details, the project “Introduction of Bangladesh e-Passport and Automated Border Control Management” is being implemented at a cost of BDT 4,569 crore.